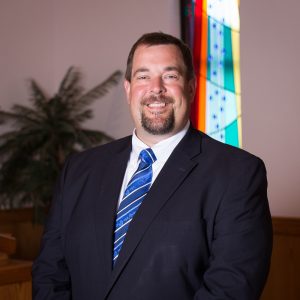 Pastor Naumann was born and grew up in Wauwatosa, Wisconsin. During his high school years at Wisconsin Lutheran High School, he was encouraged by one of his former pastors to consider becoming a pastor himself.

He took that advice and continued his path toward the pastoral ministry at Martin Luther College where he graduated with a Bachelor of Arts in 2001. His final four years of school were spent at Wisconsin Lutheran Seminary in Mequon, Wisconsin where he graduated with a Masters of Divinity degree in 2005. As part of his training, he spent his vicar year in Minocqua, WI. This proved to be an interesting year, as he honed both his preaching ability and his fishing/hunting skills. Upon graduation in May 2005 Pastor Naumann was assigned as associate pastor of Good Shepherd, Fond du Lac where he served for fourteen years. He joined the family at Trinity in January of 2019. One of his special loves comes in the area of worship and music.

Pastor Naumann is married to the love of his life- his wife, Mary. They have been blessed with five children, Benjamin, born September 2006, Samuel, born August 2008, Jonathan, born November 2009 and twins Matthias and Helena, born September 2011.
He is proud to be a part of Trinity and looks forward to meeting you!

We are a team of highly trained leaders and educators.